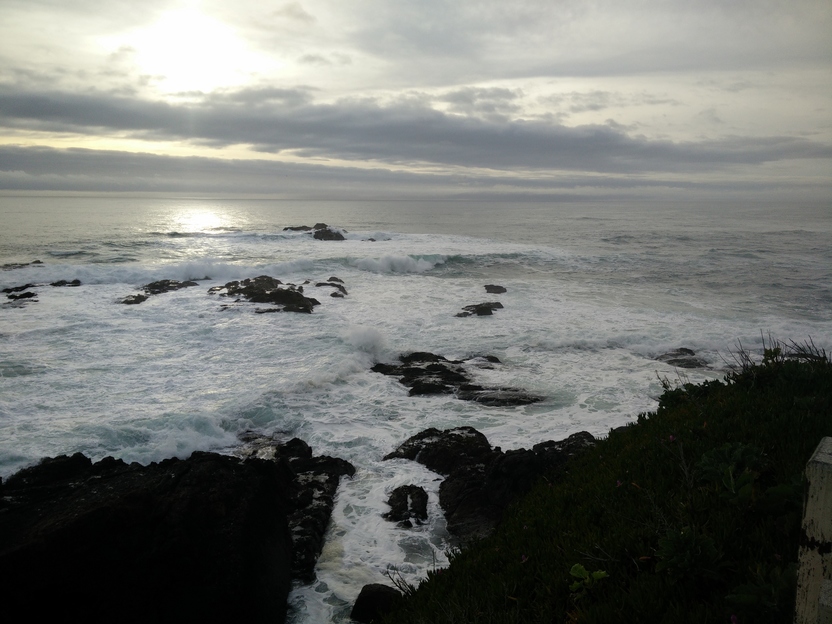 We did another bike tour in early March: SF to SLO via Big Sur on Highway 1 (mostly). The view was spectacular, even though the weather was not what I imagined California to be like. Sending bikes on a train: Amtrak is one of the best ways to send bikes to other cities in the states. It’s fairly reasonably priced and (at least so far) very reliable. It requires a little bit of planning as bikes need to be sent in a bike box, which means I have to: 1) take off pedals and 2) loosen headset to twist the handlebar (and 3) if you’re tall, your seat probably needs to be lowered). Bike boxes can be purchased at any main Amtrak stations (as long they’re not out) but not all stations have baggage service. We called all stations we were using to make sure that boxes and baggage service were available.

California can be rainy: Even though Big Sur was beautiful and sunny for weeks before and after our trip, we managed to hit the weekend when a storm hit the area. We had to modify our trip and make the third day a little shorter, so that we could set up the tent before the worst part of the storm arrived.

Stormy day on Highway 1 is not all bad for cyclists: Even though we had to pedal hard to go even downhill on Day 3, there were a couple benefits to riding on Highway 1 during bad weather:

1) There is a shuttle from Monterey Presidio to Nepenthe (cheap! just $3.50 or so) that has a bike rack for two bikes. Normally, this shuttle fills up before leaving the presidio (and non-military people are not allowed into the presidio) but that day, there were only 3 passengers including us. The shuttle driver was very friendly. The only concern was that these shuttles do not run if the weather is really bad and the weather on that day almost qualified for cancellation. Once the shuttle go past a certain point, there is no longer working radio, so the shuttle wouldn’t turn around, so we were crossing fingers. Of course if the weather is so bad that buses can’t run, maybe we shouldn’t be biking either…

2) Very few people wanted to be on Highway 1 during this storm, which meant that we saw very few cars on Day 3 and Day 4. From what I heard from people from California, Highway 1 usually gets a lot of traffic on nice days and cars go by fast (and shoulders can get narrow), so we got lucky in that sense. At one point, no car passed us for more than 20 minutes. Even though it was very foggy, the UV still came through.

The sun is strong: Even though Day 1 was cloudy, my friend got sun burnt.

The storm presented new challenges for our ride but all in all, we had a great time. We did, saw, and learned a couple new things – I’ll blog about them later.