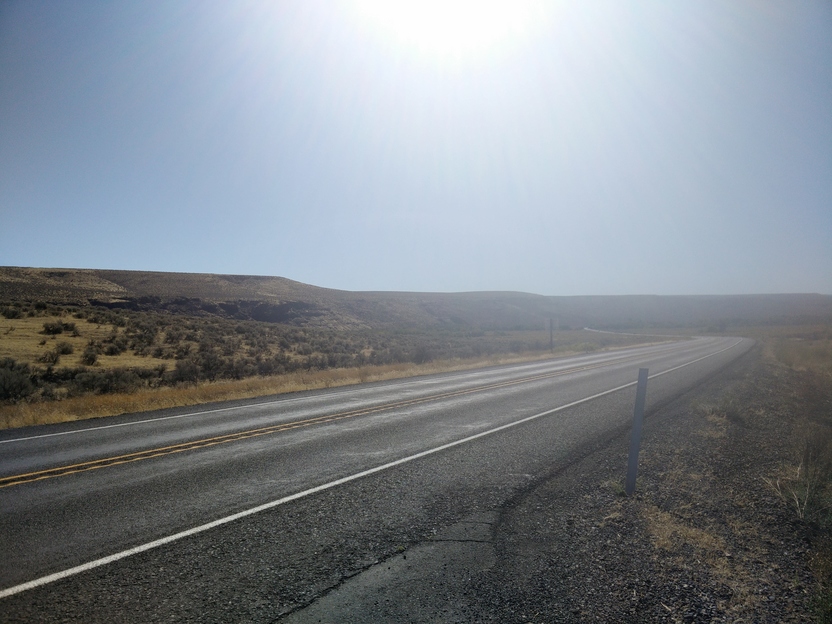 I thought the first two days were hard enough but at the end of Day 2, Mako and I both guessed that Day 3 might be the hardest for a few reasons. Bring enough water and food: I think Day 1, 2, and 3 were all difficult for me for different reasons. We didn’t bike on gravel on Day 3 (Hurray!) but there was one part that had no store (and just one house) for about 30-35 miles. We knew that this was coming, so we got a lot of snacks and juice in Wapato (since we skipped Toppenfish).

While in Wapato, we met an older man on a wheelchair who knew a lot about the area and the road we were going to take. I was asking him about hills and he told me exactly where the hills were and how hard they were – and he was completely right.

Wild horses: The man also told us that we would see wild horses on Route 97 and we did! Beautiful horses. All curious to see two little moving creatures (us).

Hops and wild domestic dogs: Mako told me before that he once read on a touring cyclist’s website that he carries 6 cans of dog sprays when he tours around the world. I sort of rolled my eyes hearing that but when we were biking through the hop fields after Wapato in parallel to Route 97 – which is like biking through clouds of floral IPA – we passed by many farm houses with unleashed dogs who were SO excited to see slow moving cyclists. They all ran out and tried to catch us. With me being the slower cyclist, I was every dog’s favorite target. I did not get bitten and I think the dogs were just having fun running around but I sure thought about the 6 cans of dog sprays. Fun times.

Unexpected pass!: Route 97 was really dry and we only saw one house about half-way to the next town. There was some climbing and this is where I started appreciating the sing “Right Lane Ends” but we were both surprised to see the sigh for “Satus Pass Elevation 3107”! We saw many deer and cows on the way down to Goldendale, where we could see many volcanic mountains over “golden” fields. We undid all the climbing (and did a little more climbing), got some grocery, and headed down to Maryhill. We thought that we could take the same windy route used for Maryhill Festival of Speed for skateboarders but that involved going through a private road with no trespassing signs all over the property, so we decided to just follow Route 97. It’s really amazing way to end the day, going downhill while looking at Columbia Gorge and Oregon.

Blood Moon!: We got to the Stonehenge in Maryhill. There were a lot more people than we expected because it was a total lunar eclipse of a super full moon! What a great way to end this ride.